An important aspect of the ESIP community is recognizing the outstanding accomplishments, achievements and service of our community members and individual participants. At the 2020 ESIP Winter Meeting, we recognized the efforts of three phenomenal individuals (Michael Goodman, Danie Kinkade, and Yuhan Rao) and the partner organization of the year (StormCenter Communications, Inc). Click the tabs below to read more about the awardees. 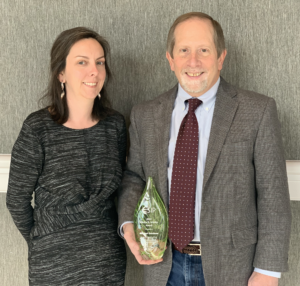 demonstrated leadership, dedication, and a collaborative spirit in advancing the field of Earth Science information. The award was presented to Michael Goodman by Sara Graves. Here are some of her remarks:

“I am pleased and honored to present Michael Goodman with the ESIP Martha Maiden Award, which recognizes individuals who have demonstrated leadership, dedication and a collaborative spirit in advancing the field of Earth Science information. Michael has exemplified those qualities through over 30 years of service to NASA and the Earth science community. He has been involved with ESIP from the very beginning. He was co-I and project manager for the Passive Microwave (PM) ESIP project, one of the original ESIP projects that blazed the path for the formation of the ESIP Federation that Martha had envisioned. In fact, as one of the first chairs of the ESIP Constitution and Bylaws Committee, Michael was directly responsible for shaping the early Federation. 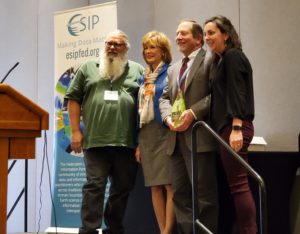 Early in Michael's career, he helped lead one of the first Earth Science information systems, WetNet, which involved delivering monthly subscriptions of precipitation data via magneto-optical disk to investigators around the globe. The success of the WetNet project led to the formation of the Marshall Space Flight Center DAAC, later the Global Hydrology and Resource Center, where Michael served as Project Scientist and later DAAC Manager. He has also served as manager of the NASA Disasters Program, the acting Deputy Manager of the MSFC Earth Science Office, the Interim Program Executive for Earth Science Data Systems at NASA Headquarters after Martha resigned, and most recently the Deputy Manager of MSFC's Science Research and Projects Division. A focus of his research has involved a large number of active field campaigns stretching around the world, wherever interesting phenomena was to be studied. Along the way Michael stayed closely involved with community activities, serving as the ESIP vice president almost 20 years ago.

I have had the pleasure of working with Michael in many of his duties over the years and have never ceased to be impressed with his dedication to science and his congenial attitude in leading and working with others in the Earth science disciplines. Michael is a true team-builder with a tireless work ethic. He inspires and enriches everyone around him and it continues to be a pleasure to be his colleague and friend. Congratulations, Michael!”

The President's Award honors an individual who has made the most significant contribution to ESIP in the previous year. The award was presented to Danie Kinkade by 2019 ESIP President Karl Benedict. Here are some of Karl's remarks: 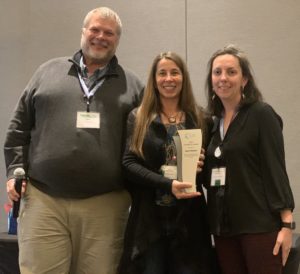 “The success of ESIP depends upon fostering new leadership to continue to build and evolve the community. Fostering ESIP leadership starts in our collaboration areas and ultimately depends upon successful recruitment into our elected leadership. As we've heard, this year's ESIP Nomination Committee, under the leadership of Danie Kinkade, had extraordinary success in recruiting candidates for this year's leadership election – expanding our leadership pool and helping our members recognize their leadership interest for themselves. For this and her efforts in systematically improving our nomination processes and documentation for future committee chairs, I have selected Danie as this year's recipient of the ESIP President's award. Her efforts will produce a lasting impact on our ability to build the leadership capacity of ESIP and I am thankful to her for this contribution.”

The Catalyst Award honors those who have brought about positive change in ESIP and inspired others to take action in the past year.

2019 ESIP President, Karl Benedict, presented the award to 2019 ESIP Community Fellow, Dr. Yuhan Rao. Below is the citation for the award:

“This year’s award is being presented to Dr. Yuhan Rao, postdoctoral research scholar at North Carolina Institute for Climate Studies of North Carolina State University. Yuhan hit the ground running as an ESIP Community Fellow in December of 2018. He started his tenure just as the ESIP Machine Learning Cluster was also starting up. Described as ‘superb’ by Cluster Lead, Anne Wilson, from day 1, Yuhan has contributed to shaping the group’s mission and activities, volunteering to lead initiatives particularly in the realm of educating people about machine learning, organizing breakout sessions at ESIP Meetings, as well as helping to organize the GeoSemantics Symposium at the 2019 ESIP Summer Meeting. Also at the 2019 ESIP Summer Meeting, Yuhan helped to initiate a successful FUNding Friday proposal. He is passionate about science communication (among other things) and this was certainly evident when he proposed that the Machine Learning Cluster begin writing a newsletter – the first of its kind for a collaboration area in ESIP. Of course, not only did Yuhan propose this, but he took the lead in composing and releasing it. Yuhan, you are known by many to be, not only talented, but also enthusiastic and good-natured, the kind of catalyst we all need. We hope you will continue to engage with ESIP for many more years to come.” 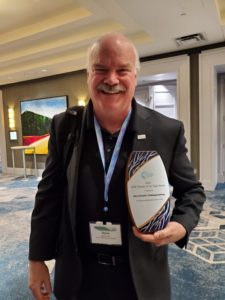 ESIP's Partner of the Year Award honors a partner organization that best exemplifies the spirit of ESIP in one or more areas. For the 2020 award, we were particularly looking for partner organizations that have supported ESIP's 2015 – 2020 Strategic Goal #4  (Increasing the Use and Value of Earth Science Data and Information).

The award was presented to StormCenter Communications, Inc. by 2019 ESIP Partnership Committee Chair, Nancy Hoebelheinrich. Dave Jones, founder and CEO of the organization, accepted the award. When presenting the award, Nancy commended Dave on his very active and effective leadership of the ESIP Disaster Lifecycle Cluster, including how proactive he has been in forging external collaboration with the All Hazards Consortium (AHC). The collaborations that were initiated have resulted in further development of the Operational Readiness Levels or ORLs for trusted datasets. The ORLs have resulted in significant upgrades to the AHC electric utility, which consists of both government and industry partners. The StormCenter Communications tool, GeoCollaborate, enables the use of both public data (e.g., NOAA weather data) and private (e.g., electric utility) data for disaster recovery and has proven very effective in extreme weather and other hazardous & emergency events, thus increasing the use and value of Earth science data.