The Paradigm Shift Towards Decentralization

“We’re going to let the beasts out of their cages. You, me, all of us. We’re going to change the world by putting the power of networks back in the hands of everyone. The tide of technology has turned away from centralization. It’s picking up momentum in the opposite direction, towards decentralization.” wrote Matt Zumwalt, an advocate for decentralizing the web who came to speak at ESIP’s summer meeting in July.

This Plenary presentation immediately caught my attention because I have been researching another sector’s paradigm shift towards decentralization— the energy sector.  Energy’s transition from the centralized, fossil fuel powered plants towards decentralized renewable touches on similar tropes. Indeed, on a technological level, energy from renewables requires a certain amount of decentralization in order to ensure that we have a constant, resilient supply of energy from sources like sun and wind. On a more justice-oriented and sociological level, energy decentralization democratizes ownership, access, and decision making. In the words of Zumwalt, putting the power (literally) in the hands of everyone. This is huge, since right now much of the energy system is controlled by large scale industries whose current business models are incongruent with the necessity of renewables, creating vested interest in an old system.

During Zumwalt’s talk, he alluded to the fact that the current political threat around wiping out data gave the discussion around a decentralized web a jolt. As he put it, the overt threat to data readily exposed a flaw in our current system. Similarly, as the threat of climate change becomes more real, the necessity for democratized decision making on energy becomes ever more important and exposes past vulnerabilities not discussed enough before. To top it off, the data seen as currently most at risk is climate and environmental data that make the obvious case for renewables.

Thus comes the intertwined importance of both of these decentralization efforts. As we move towards a more decentralized energy system, many are advocating for peer to peer exchange. In order for this to be coordinated and recorded, we need data and web hubs such as hash trees. To my mind, I can see the future of co-evolution of decentralization in both integral sectors. Both provide to us necessities of contemporary society and deserve to be controlled by the individuals who live in it. 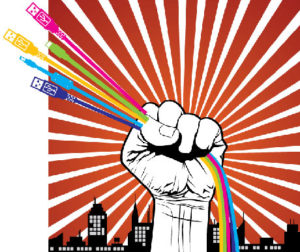