My research interests are focused on energy democracy, which emphasizes community engagement with the objective to serve a diverse local public renewable energy through decentralized, democratic means. This revolution of the energy system has potential to create local employment and control while yielding lower energy rates.

Starting in a couple of weeks, I will be working with a team at an organization in the Netherlands on a component of energy democracy: specifically the opportunities blockchain technology to transform how our energy is supplied and consumed. But how the heck does it do that? What even is blockchain technology? In order to answer these questions, I thought I would create a FAQ of Energy and Blockchain technology.

What is blockchain technology? 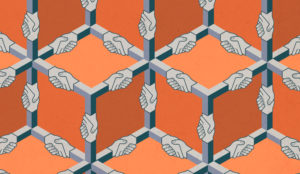 You ever heard of that odd, new currency that is flinging itself around the internet called bitcoin? Essentially, blockchain is how the bitcoin flings, or more technically, is traded.

Wait, back up for a second, what is bitcoin?

Bitcoin is the world’s first decentralized digital currency. No one entity controls this currency, but instead everybody holding bitcoin controls bitcoin. They’re little digital pieces of code that have a determined value traded back and forth.

Fun Fact: You can mine bitcoins. You can use your computer to help solve mathematical problems for the currency and then you get paid. So if your computer needs a workout…

Okay, now I get it. Back to the first question?

Alright, now that you know how it originated, let’s get back to what blockchain actually does.

Blockchain is an open source, distributed, and transparent database. Essentially, a ledger. It connects devices and computers to one another and they automatically reconfigure themselves depending on storage or capacity making it ridiculously strong. This network system cuts out the traditional, top-down, middle-men that regulate and control the networks we know now. Let’s take the example of bitcoin: they eliminated the need for banks, well known for their lack of transparency and high fees, by using the blockchain network to archive how and to whom bitcoin was traded.

How does this apply to the energy transition?

Supply chains are highly complex, which has led to a lack of transparency and information on provenance. Blockchain puts the power of information in each of our hands and allows for moving assets in a transparent and reliable way. Blockchain lets us to trade our energy peer to peer instead of through centralized utilities. It can literally keep track of the electrons flowing through the system.

The new trading scheme means we can ensure locally-generated power is used locally– which is significantly more efficient than centralized utilities, which instead transmit energy huge distance.

By enabling peer to peer trading and more local generation, we also create a more resilient network because all of the assets are helping to run and maintain the grid.

Can I get an example?

Sure thing! This awesome researcher over here in Europe, Mike Mihaylov, has initiated a prototype:

“Whenever someone has excess power they don’t need, they inject it into a local smart grid, generating one NRGcoin [alternative energy currency] for each kilowatt-hour. If, for some reason, they need more power than their solar panel can produce–perhaps it’s a cloudy day–they can buy back one kilowatt-hour at the same price from another actor in the network. If not, they can also sell the NRGcoin on a separate exchange, generating traditional money.”

This example is particularly cool to think about as an application in our US political climate where renewables are being disincentivized. ““NRGcoin gives you protection against policy change because now the payment is built into the protocol, which is decentralized. One kilowatt-hour always equals one NRGcoin–nobody can change it.”

Super cool. I’m sure that I’ll learn more about how we can harness this technology for energy democracy and I’ll make sure to get back to you with a potential FAQ Part Two (it rhymed…).