Attack of the Drones: UAVs in Education

A long time ago in a galaxy far, far away drones took over the Grand Ballroom. An ominous buzz filled the room as the drones zoomed, gained altitude, and spun into unknowing bystanders. The room was tense with anticipation, as those present wondered what the Attack of the Drones meant for the Galactic Empire. 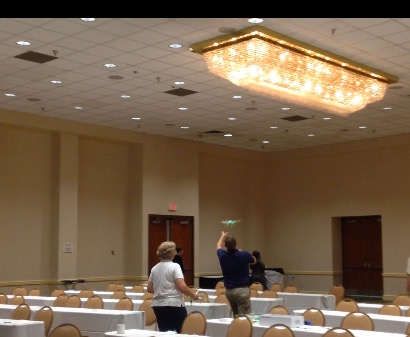 Okay, okay, so it turns out that “a long time ago” was just last week at the ESIP Summer Meeting, and the “galaxy far, far away” is the Marriott in Durham, NC. Oh, and “the force” behind these drones was none other than a group of 15 North Carolina teachers ready to inspire students in education through drones.

We were also not worried about the Galactic Empire so much as the chandeliers that a couple of precocious drone-flyers hit in their motivating commitment to altitude.
The day-long workshop was spearheaded by the ESIP Education Committee, with LuAnn Dahlman, Shelley Olds, Margaret Mooney, Preston Lewis, and Dan Zalles successfully preparing and executing a great day of educational fun.

The teachers arrived early in the morning last Tuesday to receive their new drones– a gift they got to bring back to their classroom, thanks to the generosity of the ESIP Federation. Preston provided them with a quick tutorial on how to steer the drone, Randy Russell had prepared a B4UFly presentation on FAA regulations, and then it was time to put new knowledge into action. The drones were a bit wobbly at first but by the end of the first session, teachers had the drones stable and doing their bidding. We even had them adding weight and barometers to see how the drones reacted.

In between flying sessions, we had presentations from people who are using drones in their research and programming. They talked about the opportunity to use drones for carbon dioxide monitoring, pairing drone and satellite data, and generating 3D models. Kirk Hogenson from the University of Alaska even described their program “The Modern Blanket Toss” where they connect with underserved youth in Alaska to teach them how to use drones and get them engaged in STEM. These students then complete projects to help their communities using their newfound knowledge for collecting data using drones.

The Education Committee plans to stay in touch with the teachers to see how their drones are working in their place of education. In the upcoming months, we hope to adapt some of the activities the teachers tried into an eBook so that more educators can utilize this exciting and fun educational tool.