ESIP is 20 years old! To celebrate, we interviewed ESIP community members on their perspectives on the progress of making Earth science data matter from over the last 20+ years. This is the first in a series of interviews that will be released over the next year. 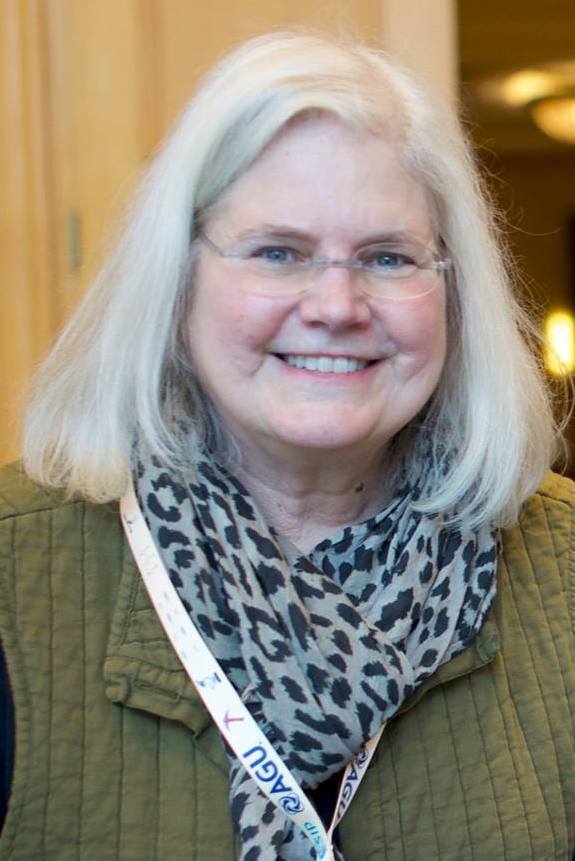 Could you tell me about how you got started working in the field of data and informatics, particularly as it pertains to Earth Science?
Martha: I graduated with a Master’s degree in Radio Astrophysics. With that degree, I got a job as a NOAA contractor working on passive microwave atmospheric satellite data, which is the same wavelength that radio astrophysics uses. So I started off writing scientific software to reduce atmospheric profiles for microwave data. That was in 1985, so astoundingly–33 years ago.

What was it like to work in data and informatics at that time?
Everyone had terminals. We used a big mainframe computer, and programmed in FORTRAN. We would go down to the computer room and write our programming. Looking at data was difficult. We worked on providing data for the weather forecast, which everyone was trying to improve.

After working at NOAA, can you describe what your career trajectory was like?
I faithfully agreed to move from being a contractor at NOAA to being a contractor at NASA. A man at my contracting agency had worked at NASA headquarters, and he thought that I would get along with Dixon Butler at NASA and enjoy working there. NASA found me valuable because I had real experience working with data. At the time, NASA was just beginning to plan, design, and develop the Earth Observing System and the concomitant data system–EOSDIS– Data and Information System for the Earth Observing System.

Today, Earth Science and Earth Science data is so important. But at that time when you began your career, was it something that people were really interested in? Was it hard to gather that momentum?
The start of the Earth Observing System (EOS) was under the George H.W. Bush administration. The republican idea was that we don’t know anything about climate change, so we should study it more. To begin, the NASA budget was increased by 20x. Then, cuts occurred over the years until the final budget ended up being around 8x that of the original Earth Science budget. It was a very ambitious program, and it generated more data than ever. Technological breakthroughs were needed at the same time that everything was being built.

There was no internet when we started. I think that’s why we ended up getting requested to start ESIP–because the strains of building EOSDIS were so difficult. The technology was changing underneath us. It was apparent that the government couldn’t do it all by themselves. So ESIP was begun, and I was lucky enough to be asked to start it.

What was the vision for ESIP? What did they hope ESIP would accomplish that they couldn’t accomplish themselves?
The National Research Council of the National Academy of Sciences, in a report by the USGCRP, recommended the establishment of ESIP. The vision was very rudimentary. They knew that government couldn’t do it alone. They knew that industry and universities needed to be involved. They sketched out a little cloud in the report –a cartoon with a cloud and a government box, an industry box, and an academia box all attached to it. We started off with this very visionary idea and began to figure out how to prototype it. It was originally worked on by my boss, Dixon Butler.

Aside from NOAA and NASA, were there any other influential players in Earth Science data at that time?
Scientists were very interested in Earth Science data. They had been clamoring to use NOAA data. The storage of NOAA data was optimized for weather forecast. Getting it out of the archives was what we call pathfinder datasets–a test for being able to re-process data over long time periods and to try to extract climate records. Data were on tapes. There were 14 tapes a day from AVHRR (advanced high resolution radiometer), for example, which was a precursor for MODIS data that is used today. You could use it to look at land, ocean, and atmosphere. We started working with NOAA to get data in advance of building the satellites for the EOS.

Then there were big government contractors. The contract for EOSDIS was huge and very expensive. It was like erecting a huge circus tent. It was very hard to do with the technology changing so rapidly.

What changed in the federal government that led to their interest in Earth Science data?
The group of scientists that wrote about what was needed to study the Earth as a complex system were brilliant people who understood that climate change was happening. They wanted to know how you go from from pattern to process, because things are dependent on other parts of the system. Interactions between the air, sea, and CO2 accelerating into the system. They figured out the suite of observations that were needed to understand the system. They also looked at how much resolution would be needed, so the data rates were much more rapid than the data rates for weather satellites. It was a system for scientists at that time. The public was thought of as being on a different tier in regards to being able to use the data.

Can you describe some of the major challenges and issues that were facing Earth Science or Earth Science data / informatics?
Data rates were huge for that time, although nothing like we have now. We had data coming in from satellites at 300 MB/sec. It was so fast that they needed to build special boxes to take it in and down rate it so it could come in to the data systems. At the beginning, we had an issue with the on-board recorders of MODIS. It would stop the data from flowing–stop the computers from processing the data. It was a technical glitch called a “bit flip”. So we got behind. We could only process it as fast as real time. That was how we were pushing the envelope. The data had to be put on a physical media to be transferred. It was an exciting time–making all these breakthroughs and seeing all these challenges.

Since you began working in the field of data and informatics, what are some major milestones that have occurred in the field of Earth Science data / informatics?
The technological advances of computers and storage. The fact that the US government has made data free (no cost). For example, in the past, someone would have done their PhD dissertation with one LandSat scene, which cost $5000, and that was all that they could afford and all the computer resources that they could use. It was just a small postage stamp on the Earth. Now, there are seasonal US images of LandSat montages that are computed. With more data and better computer power, really smart scientists are able to look at large portions of the Earth in higher resolution.

It’s clear that Earth Science data is important to scientists, but it is also now important to the public. What are some reasons that Earth Science data / informatics has been gaining more recognition than in the past?
The ubiquitousness of data availability. People working in informatics are helping to allow different types of data to be integrated together. For example, there are beautiful and inspiring things that I’ve seen of bird migration patterns. Data from ornithologists that show where birds are moving are put on top of Earth Science data to show how climate and bird migration are changing at the same time. Its remarkable how people get ideas and can do it. They are finding out new things all the time.

That just highlights how useful Earth Science data are, and how we can use it, including in our everyday life.
It seems that young people know more about what is needed to help manage the Earth. I know a lot of people whose kids are ecologists or some kind of Earth engineers and they are worried about what is going to happen to the Earth. Particularly, with our politicians being unwilling or shortsighted to face these issues. Perhaps they think that technology will come up with a solution to solve it all. I think there is a lot of interest with the next generation–they will be able to put the data together in ways that we can’t even imagine.

It seems like an accumulation of knowledge, where the more we learn and the more we understand creates momentum towards wanting to seek out solutions for the environmental issues that we have now. What do you think are some of the major challenges and issues that are facing Earth Science or Earth Science data / informatics today?
There are still some hard problems to crack in regards to putting different kinds of data together. Putting data in the cloud, instead of just storing data in NASA archives, is something that my successor at NASA is now doing. This helps scientists to be able to use NASA data with data from other organizations and sources. It is something that is just beginning to take off, and will make the data more valuable. Because just having one kind of data limits the kinds of hypotheses that you can make, and how you can learn.

Where do you think that Earth Science or Earth Science data / informatics is going in the future?
Right now people need a lot of expertise to be able to look at data. It would be remarkable if someone could develop applications that would allow people with less expertise to use data. So a person like my husband, who is a violin maker, could have an idea and ask a question and be able to use an application without having to understand the scientific basis behind it. That would really change the world.

I couldn’t agree more. If you could wave your magic wand, what would you like to see for the state of Earth Science data and informatics?
People have to remember that funding is very important for having involvement. One thing that NASA did early on was that they provided a good portion of funding for people to use; whereas, many other scientific organizations before them wanted to maximize science while spending as little as possible on data and data curation. I think that NASA had the right strategy. I hope that the funding continues, because it can always be used to do more with all of the technological breakthroughs.

The EU has the Copernicus program, which is a very ambitious program. It reminds me of EOS, except 30 years later. They have lot of data, and they are sharing with the US. There are many other governments, such as the Japanese, that are building Earth Observing satellites, so international cooperation is also quite important.

—–
This blog post is part of a series of interviews conducted in celebration of ESIP's 20+ year existence. It is intended to gather perspectives on the progress toward making Earth science data matter over the last 20+ years. If you would like to share your perspective, let us know at staff@esipfed.org.