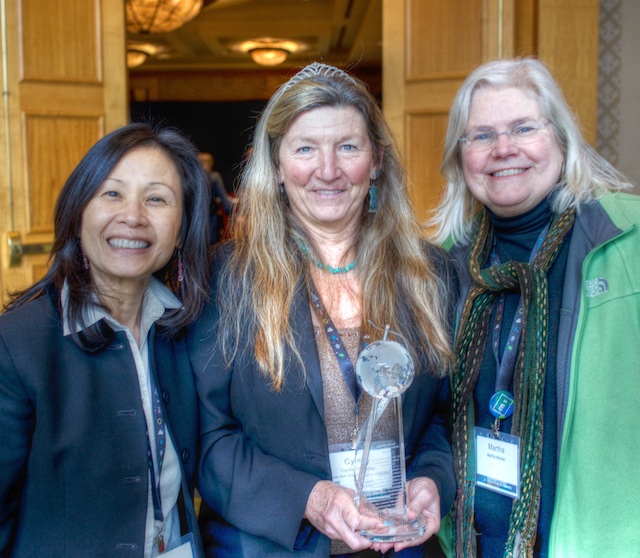 Earth Science Information Partners (ESIP) is proud to announce the recipients of several awards, including the 2017 Martha Maiden Lifetime Achievement Award, President’s Award, the Catalyst Award, and the ESIP of the Year Award. These awards recognize community members that have made outstanding contributions to ESIP and the broader Earth science data and informatics community.

Cyndy Chandler, Information Systems Specialist in the Department of Marine Chemistry and Geochemistry at the Woods Hole Oceanographic Institution (WHOI), was awarded the 2017 Martha Maiden Lifetime Achievement Award by the ESIP Federation. Christine White, ESIP Vice President said that, “Cyndy’s impact and service in the fields of oceanography and information management, and how she has built and led community in these fields, truly personifies this award. ESIP is honored to recognize all Cyndy has done – and continues to do! – for our community.”

Letters of support noted that Cyndy is an unwavering champion of data science and information management. She has been active in development and advancement of best practices and novel technologies that not only benefit the oceanographic community, but are also extensible to other domains and communities. She has played a pivotal role in the evolution and success of the Biological and Chemical Data Management Office (BCO-DMO). She continues to educate and collaborate to advance the practice data management and curation, advocating for open science, and promoting data publication and citation. Her efforts to adopt standards and utilize controlled vocabularies within BCO-DMO have lead to collaborations in semantics and Linked Open Data that have accelerated oceanographic data management and interoperability.

The award was established in 2009 in honor of Martha E. Maiden, then NASA Program Executive for Earth Data Systems, for her leadership, dedication and tireless efforts to nurture the ESIP Federation into a vibrant and mature organization.

Justin Goldstein and Bill Teng were both awarded the ESIP President’s award recognizing their outstanding achievements over the last year. The President’s award was created in 2012 and has been given annually since then to honor outstanding ESIP community members. ESIP President, Emily Law noted, “Both Justin Goldstein and Bill Teng have made significant contributions to ESIP over the years. Last year, the Data Stewardship Committee and the Finance Committee would not have been as successful and impactful without their dedication and handwork. For example, under Justin’s leadership, the Data Management Training Clearinghouse went alive in October, while Bill did a great job calling for and managing all the committee budgets.”

Lindsay Barbieri was awarded the Catalyst Award, recognizing her work in several ESIP clusters, notably the Drone cluster and data analytics. Emily Law said, “I’m impressed by Lindsay (Bar) Barbieri’s can-do attitude. Her drive and energy are inspiring and contagious. Her work in the drone cluster is influential in how the technology can advance Earth Science, inspiring others to make drone data matter.”

George Mason University won the ESIP of the Year award for the culmination of a decade or more of building success through ESIP interactions. Danie Kinkade, partnership chair remarked, “This year’s award goes to George Mason University for their success in advancing cloud computing technologies and training through their collaborations with the Federation and the geo-information community.   GMU’s activities involved leveraging ESIP’s infrastructure for regular calls; several years worth of meeting sessions focused on cloud computing and big data; student fellows; and proposal development.  This success was a result of active engagement with ESIP members such as NOAA, NASA and NSF, and had broader impacts with organizations such as Amazon and Microsoft.  As a result, six GMU graduate students who were involved in this partnership have been recruited for faculty positions at universities such as Wisconsin-Madison, and South Carolina. In addition, GMU credits its geo-information field maturing to a ranking of 5th nationally as a result of its collaboration with ESIP.”

ESIP feels that is vital to recognize members for their significant and primarily voluntary contributions to the community in order to further interoperability. ESIP is a consortium of Earth science data and technology professionals spanning government (NASA, NOAA, EPA, USGS, NSF), academia and the private sectors (both commercial and nonprofit). The organization is dedicated to transforming research data and information into useful and usable data and information products for decision makers, policy makers and the public. The Foundation for Earth Science provides administrative and staff support to the ESIP Federation.