The NASA Socioeconomic Data and Applications Center (SEDAC) is one of twelve Earth science data centers in the NASA Earth Observing Data and Information System (EOSDIS). SEDAC provides access to socioeconomic data, focusing on its integration with remote sensing and other types of data resources. SEDAC is operated by the Center for International Earth Science Information Network (CIESIN) at the Lamont Campus of Columbia University in Palisades, New York.

Highlighted Activity: In 2010–2011 SEDAC underwent a Web site redesign process that was far more than a superficial “facelift”: it substantially improved SEDAC’s approach to internal data management and external dissemination. Since that time, the SEDAC Web site has undergone phased updates to improve usability, specifically the discovery, access, visualization and analysis of data sets and other content. In 2012 SEDAC’s Web site received excellent scores on a cross-DAAC study of user experience made by Blink-UX.

As part of these updates, the organization and presentation of every data set that SEDAC distributes—approximately 180 to date—has been standardized. Data sets are first organized into collections (currently 30+) based on subject area and methodology. For each data set page six  ”tabs” are available: Set Overview (data set landing page), Data Download, Maps, Map Services, Documentation, and Metadata. This standardized format makes browsing consistent, and enables easy discovery and downloading of the data.

Further, each data set is now assigned a digital object identifier (DOI) which points to the data set landing page. Both Set Overview and Data Download pages include the Recommended Citation(s) and offer the capability of downloading the citation in ENW and RIS formats. When available, the original publication (e.g., journal article) is provided and users are encouraged to cite both the data set and the original work.

In collaboration with ESIP members and NASA data center staff, a paper was published in 2011 by Ruth Duerr of the National Snow and Ice Data Center, Robert Downs of SEDAC, and others,  that recommended adoption of the DOI for the identification of Earth science data. ESIP developed guidelines for data citation for data providers and archives, to which SEDAC and others contributed, that were approved by the ESIP Assembly on January 5, 2012. By April 2012, SEDAC utilized these guidelines to implement a Recommended Citation,  that includes a DOI, on each Set Overview page.

SEDAC has been an active member of the ESIP Data Stewardship Committee, which grew out of ESIP’s commitment to data preservation standards and is charged with maintaining the ESIP guidelines to ensure they remain functional and relevant. The committee also periodically re-visits data citation issues, considers issues related to data provenance, and informs the ESIP community of progress on data stewardship issues. The committee coordinates with the Earth Science Data System Working Group (ESDSWG) on Digital Object Identifiers, which offers recommendations for the implementation of DOIs by the NASA Distributed Active Archive Centers (DAACs), for which NASA has begun issuing DOIs. NASA is also developing recommendations for data set landing pages, and collects metrics on DOIs registered for data disseminated by SEDAC and the other DAACs. 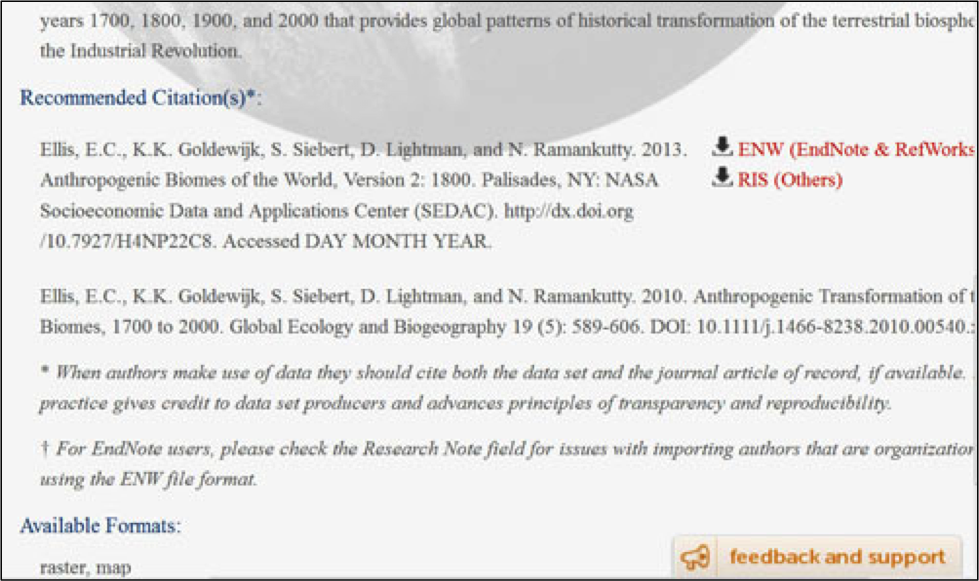 Screenshot showing the Recommended Citation on the Set Overview/landing page of the Anthropogenic Biomes of the World, v2 (1800), one of the data sets available for download on the SEDAC Web site. Now implemented on all SEDAC Web site pages, the Recommended Citation includes a digital object identifier (DOI) and the capability to download the citation in ENW and RIS formats.

Reason we participate in ESIP: SEDAC is a long-standing, active, Level 1 participant in ESIP that benefits from the opportunity to collaborate, learn, and share with colleagues in the Earth science data community on ways to improve how data are created, managed, and used. SEDAC staff members have also contributed to various ESIP activities through the years. For example, SEDAC senior digital archivist Robert Downs has served on various committees, including the Data Stewardship Committee, and was recently elected as an ESIP Representative on the Board of Directors of the Foundation for Earth Science. Data Center Services manager John Scialdone has been active in metadata and data standards working group sessions, the Data Stewardship Committee, and the Partnership committee activities, which he chaired for two years.